In Part 1 I documented the box construction. Here in Part 2 I'll be explaining the "magic" behind the making of the picture for the lid.

The box from Pushing Daisies has a very jolly looking man stuffing his face full of pie with the words "The Pie Hole" (the name of the Ned's pie shop). I scoured the web looking for the best possible image that I could use as a starting point. Unfortunately, one of the best ones I've found is shown below. 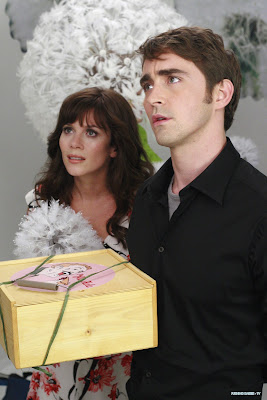 With GIMP I used the shear tool to stretch and manipulate the image until I had the picture as truly round as I could tell. 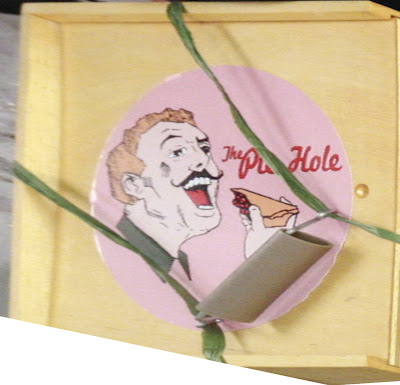 But the picture needed to be cleaned up significantly. Even if it's possible, my GIMP skills aren't good enough to remove the green string and improve the picture quality. So I took it to the analog realm. I printed it and traced it with pencil, then scanned the pencil sketch back into the computer. 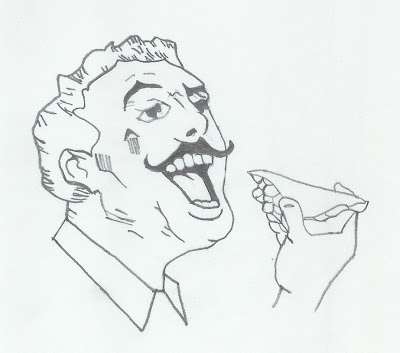 Some of the image was too fuzzy and half of the hand is missing, so some guesswork was involved.

After scanning it I used Inkscape to convert the bitmap into vectors.

A quick word on image editors: GIMP (or Photoshop and equivalents) are pixel editors. When you resize an image it either just makes the pixels bigger (making everything look "blocky") or it has to extrapolate information from the nearby pixels to make more pixels (making everything look "fuzzy"). The nice thing about Inkscape (or Illustrator and equivalents) is that it uses vectors - lines - to create the image. Of course, the computer is still displaying the lines as pixels, but the software doesn't need to guess at what the pixels should look like when resizing the image. The vector information tells it everything it needs to know. You can take a 1" x 1" image and blow it up to 10" x 10" and it will look just as good.

Of course, there are limitations to vector graphics as well. They are really only suitable for working with illustrations, not photos. But since I was working with an illustration here it was going to work out nicely.

Converting the drawing from a bitmap to vectors is easy in Inkscape, but getting things to look the way you want takes some fiddling around with the tool. I don't remember the exact settings I used for this particular image. But it's pretty easy to just tweak the settings, test, and adjust as you go. After I had the line drawing converted to a vector graphic I was more easily able to clean it up. There were a few "blotches" here and there that needed to be removed. Some holes that had to be filled. And some of the lines were not as smooth as I wanted and had to be smoothed out. I did like how the lines had a bit of texture to them so I left most of that in. I think it adds to the look.

I used the reference image to add color by just using the color picker tool. When using this tool if you just click on the reference color you are actually only selecting a pixel. And since the colors are usually made up of pixels of various colors (especially in this case) you may not get the color you wanted. But Inkscape gives you the ability to sample an area and it finds the average color.

Then after I finally had it looking the way I wanted, I was watching a newly aired episode of Pushing Daisies and they actually showed a pie box in a nice clear shot from the top down. 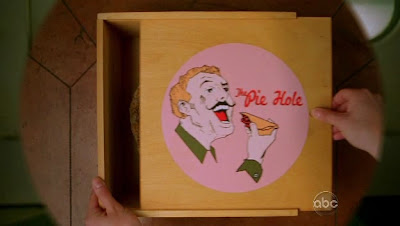 Ugh! I sure could have used this image earlier. It would have required all the same steps except the need to stretch it out to get it shaped right. But this image showed the missing wrist detail that I was missing from my other reference. So a little nip here and a tuck there I filled in the missing pieces and had a complete image. 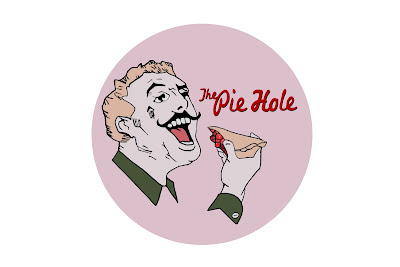 April wanted the name of her blog on the image for her boxes. No problem. The text tool made that simple enough. 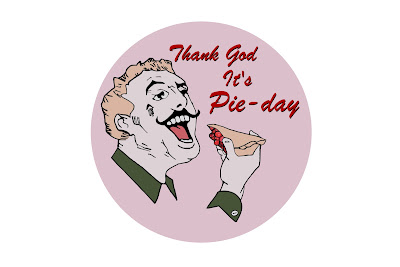 I have high resolution images available for download for anyone that wants them. They're available in JPEG, PNG, or SVG (for use with Inkscape or other vector graphic editors). I have 2 versions. One that has the text "Thank God It's Pie-day" and the other with the original "The Pie Hole."

You'll find the files here. Just right-click on the file you want to download, select "Save link as..." from the pop-up menu, then save it to a directory on your computer.

Feel free to alter and edit them for your own use. All I ask is that you don't make a profit off the image itself. Not that I personally care. But ABC might have something to say about it.

If anybody makes any significant improvements to it (especially to the Pie Hole text which I'm not entirely happy with how it turned out) please share it back with me. Just comment below and let me know how to get it.

Trying to find a way to put the image on the lid gave me the most concern. On the prop all they did was tack on a piece of paper. Again, for a prop that's fine. But in the real world it won't hold up to real use. And as you can probably see from the reference images, even the prop isn't holding up well with edges curling up.

Some ideas I tossed around in my head were:

3. Professionally printed on vinyl or plastic - Too expensive. I was quoted $35/print.

4. Painted on - This would look great and stand up well. But I don't have that kind of skill. If you can do this yourself or find a skilled friend I highly recommend this option.

5. Printed on photo paper - Photo paper is water proof (it goes through a wet process to get developed). If it gets wet just don't scrape it or wipe the water off. Just let the water run off and air dry it. And it's heavy enough that if glued properly it shouldn't curl up or tear. And Costco can do large format prints for just a couple dollars. So this was the option I chose.

I exported the image at 300 dpi and 12" x 18" and sent it to Costco. (The above downloads are the same size and resolution.) Glossy photos tend to show finger prints, so I chose the lustre option instead (a non-gloss finish). The next day I picked up the photos, cut them to size, and glued them on. (This is after the lids had been finished with polyurethane.)

I used regular Elmer's white glue, spreading it evenly on the back of the photo with a sponge brush (making sure to go all the way to the edges) and laying it carefully in place on the lid. I then spread a piece of wax paper over the top and used my hands to press and wipe from the center outward, spreading the glue towards the edges and letting a little of it seep out. The big trick here is using enough glue to get good coverage but not so much glue that you have a big mess to clean up. I made a couple mistakes of having a little too much glue.

White glue cleans up with water, so I used a wet cloth to carefully wipe around the edges, being sure to pick up the glue and not just spread it around. Some of it was getting onto the photo, but wiping carefully it will clean up.

One last look at the final product... 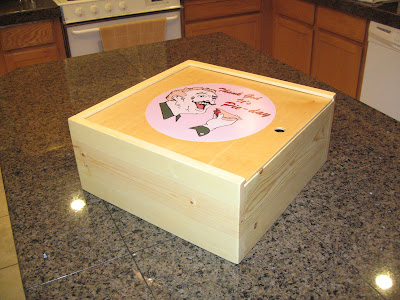 April also posted some pictures on her blog including a close-up shot of the lid that shows off how clean and sharp the picture looks when created with Inkscape.
Posted by Bill at 10:30 AM