Following in the tradition of my chainmail dice bag, I thought I had an original idea only to find someone post a similar project just a few days after I completed mine.

During a rehearsal for Annie Get Your Gun (if you didn't see this post I played the part of Chief Sitting Bull), I was watching the director describe the effects she had in mind for Annie's big trick.

It involves 6 girls each holding 2 balloons and standing in a circle around Annie. Annie then shoots out 1 balloon per girl in time to music.

(Shoot the yellow ones first.)

Then she steps to down/right stage while the girls kneel in a line and she shoots out the remaining 6 balloons in one shot, then shoots at a target that falls and breaks more balloons. All balloons being filled with confetti to enhance the explosions and make a mess.

Side note - The sticks the balloons were mounted on originally had a dowel with some carpet staples on the end that the girls would push up into the balloon to pop it. It wasn't working right so I also came up with the idea of electrifying it. Using a 9V battery, a small switch, and a small strand of steel wool taped to the balloon. It worked great on the balloons I tested. But during rehearsals things weren't working right at all (as can be seen in the above photo). The balloons were too thick and a hole would get burned into them without popping. With no more time to work out the bugs and/or get new balloons the girls just held them in their hands and poked them with tacks...and that method worked perfectly!

Back to the air canon...

I got the idea of using a compressed air canon instead of balloons in the final shot to really launch the confetti and make an even bigger explosion (and mess). I mentioned the idea to the director who thought it would be really cool as long as it was safe and cheap. I said yes to the safety and a maybe to the cheap.

I had seen the build plans in Make Magazine for a compressed air rocket launcher that looked like it would be simple enough, cheap enough, and safe enough, and with a minor modification good enough to make a big confetti mess. 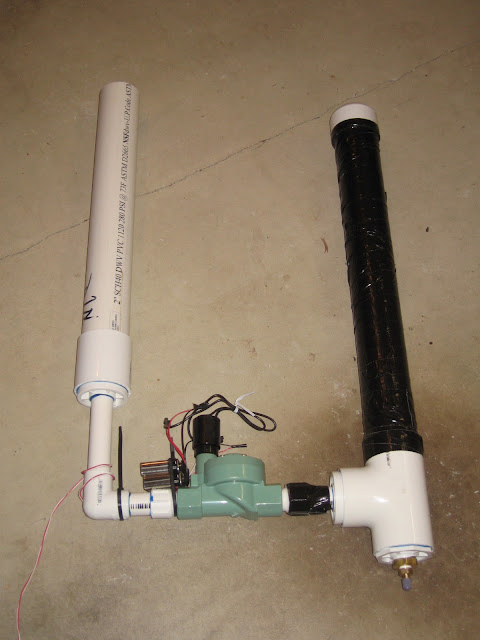 The black pipe on the right is the air reservoir (wrapped in duct tape for safety). I made it slight larger than the instructions say because I wanted a little extra volume to make sure I have plenty of air for all the confetti. At the bottom is the sprinkler valve powered by 2 9-volt batteries. The pipe on the left is the confetti tube. The air reservoir gets pumped up to 60-70 psi with a bicycle pump.

Two days after I complete my canon I see a very similar project on Hack A Day. Which is actually a repost of the same project from Make Magazine back in Feb 2008.

If anything I'm glad to see this come up. It's a good reassurance that I was on to something. I tested out my canon with some tissue paper and various types of wadding. I found that just a single paper towel wadded in a loose ball and stuffed to the bottom of the canon worked best. Things were looking good. I took it to the director and she was very impressed. We just had to figure out something to put it in.

Originally she was thinking of a crate, but the one she had was too small for this canon. Then she found a free plastic water barrel that was perfect. I cut out the top and bottom and mounted it inside with a couple pieces of 1x2. A paint job to make it look like a real barrel and a big target for Annie to shoot at and it was done.

I also made a trigger with a glowing safety switch (to prevent accidental firing back stage).

Unfortunately I didn't get any photos of the final painted barrel or firing switch.

(Here I am back stage ready to fire on cue.)

Before each performance I'd charge up the air and fill up the confetti. During the trick I would be backstage anyway so I got to be the one to fire it. And it worked perfectly each time. The explosion would be big enough to launch confetti up to the ceiling (sometimes pieces would even stick and float down later). And of course it would make a huge mess all over the stage.

I was hoping to get some video or at least photos of it in action. A video exists somewhere, I just haven't got it. If it gets to me later I'll see if I can post just the clip of the canon explosion.
Posted by Bill at 5:56 PM