So I was just in the play Annie Get Your Gun, playing the part of Chief Sitting Bull. I'm not really an actor, but it was a fun experience and I made several new friends.

One important piece to Sitting Bull's costume was the warbonnet, which was going to be too expensive for the limited performance budget. So I decided I'd buy it and make it myself, getting to keep it after the performances are over of course.

I bought the double trailer warbonnet kit from Crazy Crow Trading Post. It shipped and arrived fairly quickly, about 10 days (if I remember correctly). The kit contains all "real" materials. The feathers themselves are turkey feathers dyed to look like eagle feathers. I was missing 1 of 2 rosettes, but I called Crazy Crow and they shipped me another pair right away. 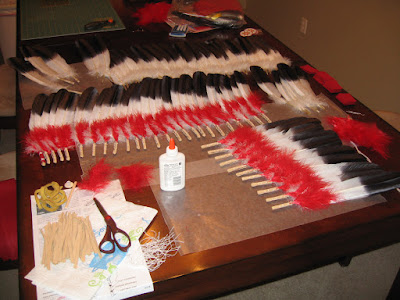 The instructions seemed clear at first, but during actual assembly I hit a few stumbling points that were just not clear enough. More pictures and more detail would have been helpful.

For instance, the final step involves lacing the feathers together with a piece of waxed string. This holds the feathers back and keeps them spaced evenly and hanging correctly. The instructions say to make holes in the back of the quill about 4 inches from the bottom and lace the thread through those holes. That's pretty much all the info you get. But there really isn't much space on the quill at that location to make any kind of hole big enough to lace this thick waxed thread. Also, how are you supposed to even make a hole? The instructions suggest using a needle or awl. Ha! No way that's going to work. The quill is very hard and trying to pierce it seems impossible without injury. And even if you manage to pierce it I would imagine it would split instead of making a puncture.

By the time I got to that stage of assembly I had 2 days left before the first performance. I actually did the final lacing in my dressing room during a dress rehearsal. What I ended up doing was just fish the thread between the 2 glue points for the red fluff feathers. It wasn't an ideal solution, but it worked well enough to hold up for 2 dress rehearsals and 3 performances. 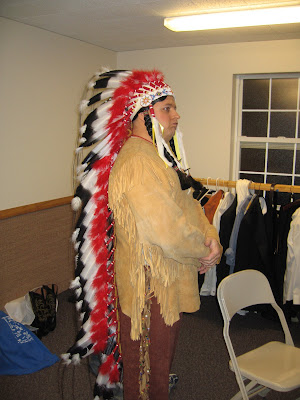 Several feathers are in desperate need of repair. And I want to redo the lacing, and find a better way to do it. Other than that it is still in fair condition. It came with 90 feathers. About 10 of them are just too ugly to use, and I only attached 64. So I still have plenty left over if I need to replace some. (One or two have tips that are breaking off.)

Presenting "Teeth of Many Bears" to Annie:

For anyone else wanting to try making such a warbonnet, the pictures in the catalog or online help to make up for what is lacking in the instructions. Other than that some creativity is needed. Also, allow yourself lots of time. It took me about 80 hours total. There are several "glue and wait" points during assembly, so allow for that as well.

If I want to continue to build out my Native American costume pieces I would definitely use Crazy Crow again.

Other parts of the custume above:
In the ballroom scene:
My ballroom costume got huge laughs. I just had to step out on stage and the audience started busting up. Fortunately I practiced keeping a straight face or I might have busted up as well.