A couple month ago, my sister blogged about her sourdough bread. I love homemade bread and like to make it whenever I have time (and ingredients). And since sourdough is a favorite at my house I thought I'd give this a try. I ordered up the sourdough starter from King Arthur Flour, fed it, and gave the rustic recipe a try. 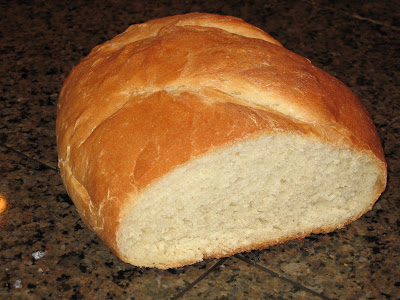 A delicious loaf...of regular white bread. No sourdough taste at all. Is it just due to young starter? Is the starter dead? Is it the recipe?

Before I began assembling the recipe I gave the starter a sniff and it just smelled like bread dough. Having never worked with sourdough before I didn't know what to really expect. Then after refreshing the starter and letting it sit I noticed that it had taken on a very tangy smell. I figured the previous batch just didn't have the right flavor yet, and this new batch would surely be better. So I gave the "extra tangy" recipe a shot.

The extra tangy recipe requires a lot of mix and wait stages. Mix the starter with more flour and water (basically making a very large batch of starter) and let sit for 4 hours, refrigerate for 12, add remaining ingredients, knead, let sit another 5 hours, divide and shape, let sit another 2 hours, bake. Ugh. I have a problem with recipes that take this long. Oh, there's very little actual labor involved, but real life often gets in the way of meeting the bread's schedule. When bread takes this much planning and scheduling I don't like making it. But I had to give this a shot because I really needed to know if this recipe would be worth it. 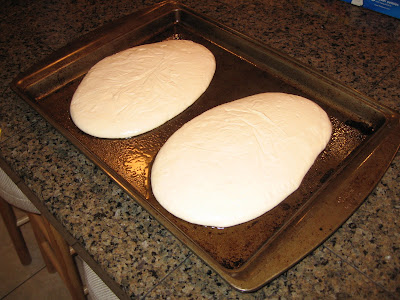 That's the dough, "shaped" and ready for baking. No rise at all. The recipe contains no yeast, so all the rise comes from the fermentation of the starter. 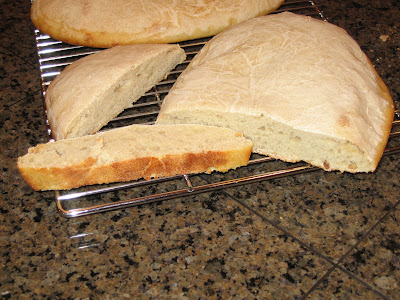 It looks like the sourdough was fermenting. I see bubbles. Was it just weak and unable to get lift? Was the dough too heavy? The dough felt good after kneading it. But then, as it sat it became a sticky, gooey, blob. Sitting on the tray after dividing and forming it just became a puddle of dough. No life at all.

On the other hand, those bubbles might just be from the steam during baking and not fermentation. What we might have here is dead sourdough.

I wasn't able to follow the recipe's times exactly. In every stage the dough had to wait an additional hour or two to work around my schedule. I also ran out of AP flour and substituted a cup of bread flour (I anticipated this and mixed all the flour together at the beginning to prevent weirdness due to a switch in flour half-way through). Could one cup of bread flour have made a difference? I only used unbleached King Arthur Flour (as recommended) for all feedings and recipe building. So at least that's one variable we can remove from the equation.

After baking it had a slightly tangy taste. Not exactly the sourdough taste I know and love from off-the-shelf bread though. And it was very dense and heavy...most likely due to the failure to rise. Where did things go wrong?

The starter still seems alive though. I can see it bubbling in the crock. I'm going to try to make it a little more sour with a whole wheat flour feeding. I'll definitely be giving the rustic recipe another try with a more sour starter. It's a very easy recipe with none of that overly long mix it up and wait stages. I can just feed the starter the night before, make the dough the next morning and by lunchtime I have bread.

I'm not sure yet if I'll try the extra sour method again. Maybe once I'm confident that the starter is still alive and doing well (and I have room in my schedule to babysit the dough).

UPDATE (8/11/2010):
The whole wheat feeding went well (I used whole wheat we milled ourselves). But only 1/2 cup water with 1 cup whole wheat flour made it too thick. I added another 1/4 cup water and let it sit out for 24 hours. The starter became very bubbly and lost it's doughy, sticky texture. (Up until this point the starter was very gummy, almost like a soft taffy.) Also, the tangy smell went away, which had me a little worried at first.

I made the rustic recipe again and it turned out great. Still not much of a sour taste to it, but this time it's a little more noticeable. Only slightly though. Also, after refreshing the starter (this time with unbleached KAF bread flour) and letting it sit out for 4 hours it became so active it grew to fill the crock over 3/4 full where before it would only sit at about 1/2 full.

I think I'll stick to making the rustic recipe for now. It's so simple and tasty. And the taste seems to be improving with time. It's probably just a matter of continuing to use the starter and letting it age.
Posted by Bill at 12:02 PM