I can't take naps. I'm capable of it, I just shouldn't. I alway feel worse after and then I have trouble going to sleep at night. But sometimes I really want to. "Just 15 minutes" I say. But 15 minutes always turns into 2 hours and then the rest of the day is ruined. So I just avoid them now.

Then I read about the Brain Machine by Mitch Altman from Make magazine. It caught my attention and I added it to my project list. Since I can't afford to do every project I like I let the list act as my filter. Anything on the list I'm still interested in after a few months gets bumped up the list and as money and time become available they get started. This was exactly how things went for the brain machine. 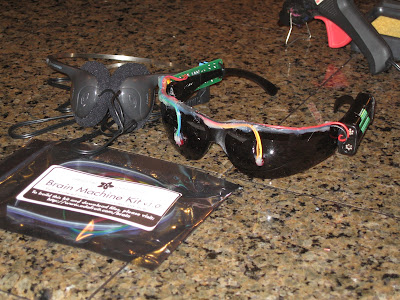 Make's Maker Shed store has one available for sale, and I was going to buy it there, but when I went to finish the check-out and saw the $14 shipping price I decided to look around to see if somewhere else had a better deal.

And a better deal I found, at Adafruit Industries. Not only was their shipping cheaper ($7), but the kit was priced $5 less too ($30). They also had much better instructions - plenty of pictures and enough detail that even a beginner could easily put this together.

The kit arrived quickly and had everything needed for assembly. Even batteries, shrink tubing, and wire ties. (You'll need to provide your own tools.) I was very impressed. It's these little conveniences that so often get overlooked that I really appreciate. 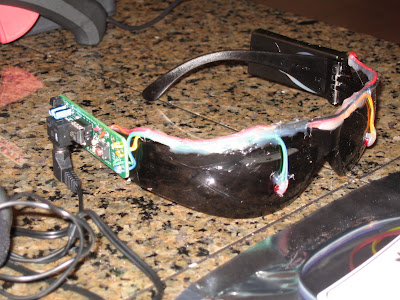 I may have gone a little crazy with the hot glue.

Assembly was very easy and went smoothly. It took me about 2 hours total, and that includes the time I spent mopping and turning the ribs out in my smoker. I almost made one mistake during assembly that (fortunately) Adafruit's terrific instructions helped me avoid. I had accidentally soldered the wrong color wire onto the negative lead on one of the LEDs. The instructions recommend testing the LEDs before making any final solder joints on to the board. I could have just let my experience fool me into thinking this wasn't necessary, but decided to take the little extra time and effort to test anyway. To my surprise I found this error before I soldered the wires to the board. It wouldn't have been a major error, but I would have wasted a great deal more time. And I hate making such simple mistakes. 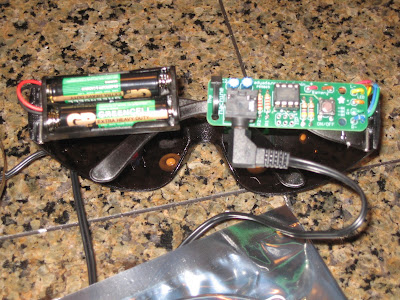 The first time I gave them a try I was really surprised at how a couple of blinking lights will produce such wild patterns. Something I didn't expect at all. But all the hype around these things led me to think I'd have a more meditative "transcendent" experience. I actually spent most of the time feeling like I was going to go blind from the bright lights. And yes, I had my eyes closed. The lights were just too bright for my comfort. I tried it a couple times with the same results. Lots of cool patterns, but disappointment overall.

So I put a piece of masking tape over each of the LEDs to see if that would help. Boy what a difference. (This is recommended in the instructions, so it's not like I'm the first person to have this problem or solution.) Now it's a much better experience. I can enjoy the light and sound show without any discomfort.

But even after adjusting the brightness of the lights I wasn't quite sure if it was doing anything for me. Then as I was relaxing with them one day my wife walked into the room and suddenly jolted me out of a trance. And that's when I actually perceived the effect it was having on my state of relaxation. Even though I was fully conscience I had been put into such a relaxed state that when jolted out of it I felt like I was being woken up from a dream.

Now when I want a nap (and it's quiet in the house) I can just slip the Brain Machine on and relax for the 14 minute cycle. When it's over I do really feel better. I don't quite feel physically re-energized, but I'm in a better mental state. In fact, yesterday I went snow caving with my son. It was exhausting with very little sleep. I had some work to do after we got home, but was having a hard time concentrating and feeling motivated to work. So I took a 15 minute break with the Brain Machine and felt better for it. All the benefits of a nap without the pesky side effects.

By the way, my wife dislikes the blinking lights very much, even with 2 pieces of tape (I just use one). So your mileage will vary.
Posted by Bill at 5:32 PM