The morning went great. We had an early start. It was a beautiful day. I had submitted the NOTAM to begin at 8:30am. I wasn't sure exactly how long it would take to get everything ready for launch, so we arrived at 6:00 to give us plenty of time. It turns out that we had everything finished and ready to go by 7:30, so we really could have started an hour later.

This intermission was actually kind of nice. It gave us time to relax a little and let the nerves settle. We also had friends and passersby come around and we could show off the whole setup. My friend Mark showed up and provided assistance, as well as my neighbor Terry (who is also a HAM and provided technical assistance in the weeks prior to launch, took photos and video that are featured in this post, and was also tracking at home).

During systems testing we were getting good data over APRS. Everything seemed to be running just fine.

The launch occurred at 8:30am.

We packed things up as fast as possible and returned home to return the helium tank to the garage before heading out on the chase. But just a few minutes after launch, when the balloon was at about 3000 feet, we lost contact. We still had good visual contact, but nothing over APRS. Visual contact is fine for chasing a balloon, but ultimately we needed to chase a parachute that is smaller, moving faster, and impossible to chase visually.

I figured (hoped) we might pick up the signal again when we headed into the city towards the landing zone and towards more digipeaters. 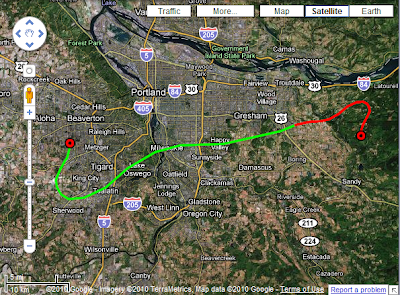 It looks even better in a 3D profile in Google Earth.
Download the KML file here: Prelaunch_prediction_20100828_1500.kml

Unfortunately we got nothing. I wasn't sure if the problem was on the payload, which I could do nothing about, or if the problem was with our mobile rig. But along the way I got a phone call from my mother-in-law and she told me she was tracking it on the APRS website and it was passing over Lake Oswego (see 9:00am Relief above). This made me feel much better to know that the payload was doing fine and it was being tracked by the digipeaters.

When we were about half-way to the landing zone we found a little donut shop with WiFi. Once we were online we too were able to finally track it and it was doing great. Moving along very closely to how the prediction model went. We were still tracking it visually too. In fact, we sat in the donut shop parking lot watching and tracking. The kids standing outside the car looking up at it with me inside calling out altitudes. Things got really exciting when we passed 90,000 feet. I hadn't really expected it to go that high. I intentionally overfilled the balloon to get 9 lbs lift to make it rise faster (we got about 1200 ft/min ascent rate), and this reduces the maximum altitude. But it just kept going.

It finally burst just moments after reaching 100,659 feet. An event that the ground crew was able to visually witness. And the descent began.

Descent looked good. It was very fast at first (about 6000 ft/min = 68mph), which I expected (the thin atmosphere isn't enough to slow the parachute). It was showing signs of slowing as it dropped below 48,000 ft (3000 ft/min). So the parachute appeared to be working. Then after we got an update from 46,047 ft there were no more updates. Just silence. My heart sank. That's when I got a call from Terry and we figure the cold temperatures got into the electronics and froze things up.

We were hoping that once the batteries warmed up things would turn back on, but then David pointed out that the GPS receiver will not automatically restart. And sure enough, we never did get another packet. We left the donut shop and continued towards the landing zone, scanning the sky the whole way hoping to see the parachute descending. I estimated a new landing zone based on the actual tracking data and we began a sweep of the area, driving slowly with the windows down listening for the audio beacon and scanning the grounds and trees.

After 2 hours of searching the kids were getting on each others' nerves as well as mine and we headed to lunch, then home.

At home I sat down and began to pour over the APRS data. I refined the prediction using the actual ascent rate and burst altitude and came up with a couple models. Comparing them to the actual graph I estimated that it must have landed somewhere between the 2 new models, which put the landing further north-east from where we had been searching earlier. 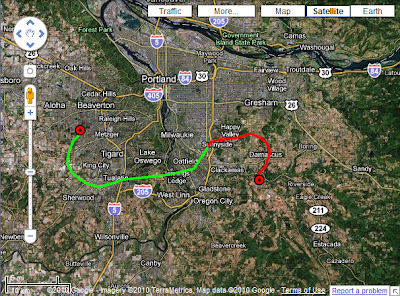 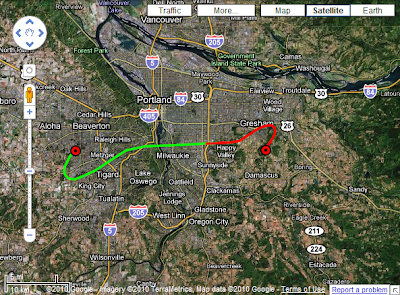 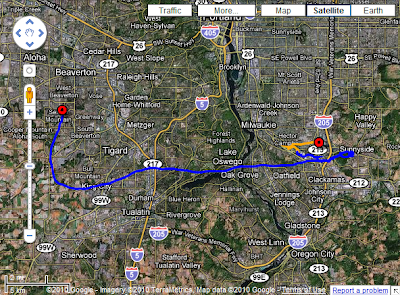 It must be somewhere between Gresham and Damascus. Using Google Earth I identified a few locations that looked suspicious (open fields or forested areas). We figure if it landed in a residential or business area someone will call the number attached to the payload. David and I headed out and left the others at home. We had about 3-4 hours of daylight left to continue the search. Fortunately the balloon hadn't drifted far so we were able to get back out to Damascus pretty quickly.

As we continued to search I came to the realization that the potential landing area was just too big for our sweeping/driving search. I don't know if the audio beacon was still sounding. There seems to be about a 50% chance that it's caught in a tree somewhere. And if caught in a tree there's about a 50% chance that it's in a residential neighborhood. So either way, there's a better chance that someone else will find it and call then there is for us to find it by driving around. But 2 days later I still haven't received a call. So my expectations are low at this point.

But we had a really fun time and it was a good experience. I learned a lot of great things that I will put into use on the next payload design and launch/recovery process.

1. Batten down the hatch. The lid was sitting on top, strapped down by 4 velcro strips. I believe it was secured enough not to come off, but it wasn't secured against the wind blowing up under it and getting inside the payload. And wind was one thing I really didn't figure would be an issue. I knew it would fall fast, but the wind factor really didn't occur to me. I think that was the ultimate cause of the failure. So next time, wind resistant hatch.

2. More redundancy in the electronics and a system that can come back online automatically. Possibly a GPS receiver with an external antenna so the electronics can be bundled up nice and warm.

3. Learn how to locate radio signals.

4. I'd actually like to have a temperature sensor so that I can know the outside conditions. Possibly send that data as part of the APRS packet.

5. Get things hotter inside the payload before launch so that it takes longer for the cold to penetrate. Fill the thing with those microwavable, rice-filled hot pads for a couple hours before launch. Of course, remove them before launch and replace with packing peanuts.

6. Better mobile tracking rig. I suspect the problem was with my radio. It was just a cheap one. Need to upgrade.