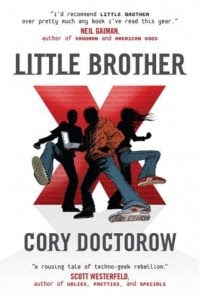 I'm not much of a reader. Not that I don't like to...I would just rather do something else instead. In the past year I've read a total of 2 books. So why do a book review on a blog about geeky tinkering?

Little Brother by Cory Doctorow is a must read for every geek out there. If you aren't a geek but know a geek, get this for them. If you're a teen who likes to use computers but is afraid of calling yourself a geek, you'd still really like this. It was written by a geek for geeks, specifically aimed at teens but adults will love it too. I got this book for Christmas, and once I started reading it was very hard to put down. I read the first 1/4 a little bit at a time for a few days, then one day I just found myself unable to stop and finished off the remaining 3/4 all in one sitting.

It's a story of a 17-year-old hacker in San Francisco who, at first, uses his skillz for purely selfish reasons or to help out his friends. Not so much for committing felonies, although he does enjoy the usual misdemeanor. He knows the rules and knows how to get around them. And he knows tech like he grew it himself. But things take a really sharp turn in his life when [spoiler omitted] and he finds himself turning his tools against [spoiler omitted] to save himself, his friends, and his city. It's a story of the little guy taking on a world that's turned against him.

Usually, fictional tech is so far off from reality that most who know better just groan and roll their eyes. (See Hackers or The Net.) But Cory did it right in this book. Most of what he talks about does exist, or could exist today. And based on the political atmosphere, it very well could be happening right now. But his use of some not yet available tech gives it more of a "very near future" feel.

It also provides more than just fictional entertainment. It has real world applications. After just about every chapter you want to grab the nearest computer and Google some of the things he talks about just to learn more. It introduces some security concepts that the average person isn't usually aware of, but in this world of identity theft and computer vulnerabilities everybody should be more familiar with. If only to protect themselves.

In the back of the book Cory lists many of his favorite reads. Books that inspired him that he recommends to his readers. So now I've got a list of books to go read. Not only has this book inspired me to do some more tinkering, but it's given me a little poke to do some more reading. Maybe I'll read more than 2 books this next year.
Posted by Bill at 9:57 PM